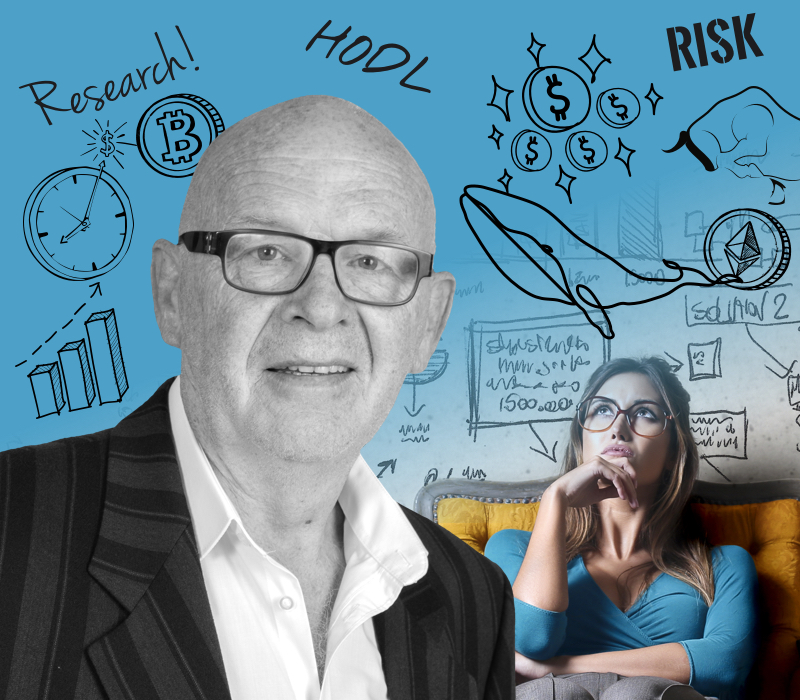 The Whales have grown big, because they feast on the tiniest Algae

This week, I was going to talk about something else. However, after monitoring a few chat rooms, I thought I’d address why many newbies, who bought crypto at the higher levels, are now selling their positions to save 50% of their invested capital.

And why will those who have been around for a while use this 50% correction to double-up on long positions.

Whilst we talk about community and cooperation, this business is no different to any other when it comes to making money. We are all in it to make money for ourselves.

Moreover, each one of us has a different appetite for risk, each one of us - to be successful - has to find a strategy which suits them, and sometimes, holding on for dear life, is no good for those whose pockets are not so deep, or their emotions can’t handle the idea of big losses.

Being bright and being brave is not the same thing

The people in this cutting-edge business are the brightest, most innovative group of young people in the world. Please make no mistake, we have seen many changes over the years in the world of speculation, the inflow of YUPPIES, and then with the internet, a massive influx of computer geeks. However, I cannot remember when so many intelligent and innovative people entered the market in such a short period.

It is challenging for old guys like me to keep up with how fast this crazy crypto world is developing and growing.

But, when it comes to the investing side of the business, I am not the only person who finds himself out of his depth.

I am very impressed by the number of new players coming into this business each day.

Sadly, too many novice traders commit their finances without understanding how speculative markets move or the risks involved.

The days of broker services are over, so investor support is minimal.

Today, the argument about knowing your client is a matter of identity, not whether the investor has an acceptable amount of knowledge to involve himself in speculation.

Therefore, we have a lot of what we used to call, Cannon-Fodder: Novice traders who get pulled one way then the other until they either learn or lose all their money.

The gung-ho attitude we saw during the bull run was quite exceptional. It was a lot stronger than we saw at the height of the dot.com bubble. However, now the market has dropped, we see many more tears than when the dot.com bubble burst.

No one can criticize anybody for buying an asset at the wrong level or putting on an investment that loses money. We have all done it; it doesn't matter who we are.

The difference between the older guys and the new traders is experience. More seasoned traders possess a basic understanding of managing risk.

This business is massively focused on HODL as if it is the only game in town.

I can appreciate that this has been working for some time, and it is an easy sell as a strategy.

However, the young guys who bought at higher levels have lost half their money, and with it, all their gung-ho attitude. Their emotions are getting to them.

So, this week, I thought I would touch on some basic trading strategies and a bit of education because there is so much more to investing and speculating in these markets than buying and HODL. And those bright young people who have entered the market over recent months with massive expectations might need to spend a bit of time studying the market's and finding a strategy that better suits their risk profile.

There are two main reasons people make a lot of money in this business: They either get in early or get in and out at the right time.

Early entry is a great way to make money. But most newbies don't do that because they often lack the tools or the connections. Many newbies buy products when they have already risen, too often after reading "paid for" reports and comments they find on social media.

Let me state the obvious.

For prices or values to rise, you need buyers. To see a profit, you need buying to appear after you have purchased what you wanted.

You don't only need this fresh buying after you have bought, but you will also need a lot of renewed buying when you want to sell.

For the uninitiated, that is why you saw so many buying recommendations before Christmas. Those wishing to sell a sizeable chunk of their portfolio could never have unloaded their positions at excellent levels unless there were a lot of buyers to take the other side.

In our world, we are obsessed with celebrity, and too many have the "follow the Whale" mentality. Because of this, it doesn't take that much to generate a buying frenzy.

Just get a few of the right people to write a report or make a short video.

I know this business is all about community and cooperation, but this doesn't mean it's a charity.

You have no one to blame except yourself if you got suckered into buying heavily during the frenzy period. It was FOMO; you were frightened of missing out. You didn't think it through, and you didn't have a strategy.

When values have dropped 50%, everyone is still crying out HODL.

Is that because HODL is a good strategy. Or is it because they do not want people to add to the selling pressure?

You be the judge.

At times like this, we should offer advice and make some suggestions.

Rely on no one. Do your research, and don't take shortcuts

If you are interested in trading, get the best advice you can, and get it from various sources.

If everyone is telling you the same story, they are probably all getting it from the same source, so delve deeper.

Moreover, in the World of headlines and bullet points, please do not skip over information because it takes ten or 15-minutes, put the time in!

Reading White-papers is all well and good for those in the know, but newbies will often get lost. A good white paper is short, sweet, and to the point. If it is, and you understand it, then try to look at some price history.

Price history on a new asset is often too short for any serious analysis. But that shouldn't stop you. Look at the price action of similar instruments and try to see where you are in the overall trend.

Last week I touched on Elliot wave as an excellent tool to use, but there are others.

If your technical analysis skills are sketchy - which applies to most people - look for a few reports and videos made by guys who have been around longer than 5-minutes.

A good rule to use is to ignore gung-ho recommendations.

Most decent analysts will offer an entry-level, a defined objective, and a sound level to place a stop-loss order. These are clearly defined instructions based on their method of analysis.

Moreover, you will often find that those who issue recommendations with defined instructions will provide up-dates, i.e., now is an excellent time to raise your stop-loss level to reduce your risk.

The disciples of HODL will argue against risk management and point to long term gains and how well they have done over recent years by simply buying, putting their coins in their wallets, and walking away.

I applaud them for their strength and the wealth they have amassed. However, I will remind people of the small print we needed to apply to every contract and recommendation. Past performance is not a guarantee of future gains.

The industry will continue to flourish and grow, so I am long term bullish.

However, as I said earlier, we are seeing massive growth in participation. A lot of this growth comes from institutions that have a history of creating buying frenzies and then collapsing markets when it suits them.

So being forewarned is forearmed.

There are as many different strategies as there are participants. Moreover, the more we learn, the more we work to improve our strategy.

When I came to cryptocurrencies, the exceptionally high level of volatility forced me to re-examine my ideas, and I have maintained an overall long position throughout this drop.

That said, I had managed to reduce any damage to my overall portfolio by reducing my exposure when the market outlook changed. I was also diversifying into assets outside the crypto arena (i.e. buying precious metals, crude, and shorting equities, which I mentioned back in my November reports).

I will endeavor to touch on other types of strategies and methods of analysis in future reports without giving recommendations.

These reports are not for those who have actively traded for many years. I wish to encourage new investors to learn more about speculative trading and improve their outcomes.

So, until next time.