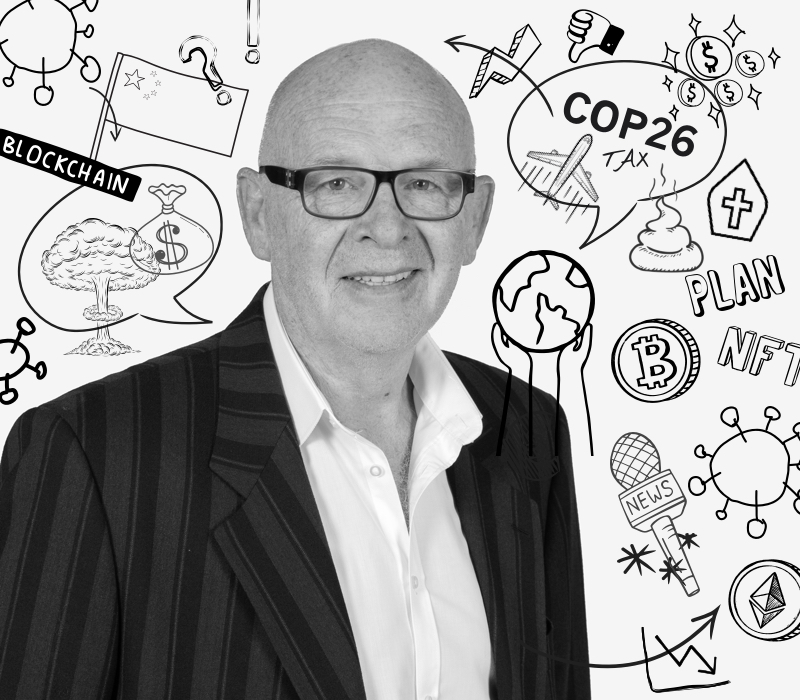 The more I hear from the young, dynamic guys out there - those who use technology to create a positive future - the more I appreciate how truly creative and clever they are, especially if I compare them to the current batch of old men in power.

In the financial world, I realize some battles with the old men in authority are coming, and I can see some potentially dangerous pitfalls ahead; especially, because some people in this industry are working with devious old men. However, I have to remain long-term positive, as the alternative is disastrous.

What reasons are those in power using to inject their rules into this business? Sure, some of the newer products and NFTs are a risk, but what isn’t? Moreover, should I accept that a high-street bank or my local politician should be allowed to get in the way of what I do with my spare cash? That’s not right!

When it comes to their ‘Green’ agenda, I don’t care how much electricity currency-miners use to do their job, if the government is taxing me to make more renewable electricity, what is their damn problem with me or these miners using a bit more? After all, we are paying for it. The fact is, we would have loads of clean energy by now if it were not for the ban-the-bomb people. And those ban-the-bomb people of yesterday have grown into today's power-crazy authoritarians! I know, I went to school with some of them!

And this brings me to this week’s COP26. An event visited by 400-wealthy people in their carbon-neutral private jets.

The outcome of COP26 is that whilst we, the slaves to the system, are up to our necks in debt, the authoritarians have decided to commit us all to spending an additional 130-trillion dollars, which we obviously do not have. Never, in the history of mankind, has so few, cost so many, so much!

As this comes when we are about to pay the cost of the Chinese virus, we have no option but to question the sanity of our illustrious leaders and ask, who are the real threats to the global economy?

As I see it, this 130-trillion dollars will need to come from taxation, or they will need to print it. Either way, this is not good for FIAT currencies but will lead to more people looking at De-Fi and crypto.

Central Bankers can tell us they are saving the planet, and politicians like the British Chancellor can declare that they are "asking us" to protect the future. But how are they asking us, they have already committed us and added to the future generations financial burden. And let’s not forget this: at COP21, it was decided by the very same people, that we should give developing nations 100-billion dollars to help poorer countries address this global crisis. However, although budgeted for by our governments, many of these poorer countries have not received the money promised. Why not, and where is it? Who is being robbed?

Never before have we required decentralized products to defend us from such political and fiscal madness. And if there is something we have all learned from the Chinese virus, is that we must stop old men from using taxation as a tool to bully us. Enough is enough!

Instead of going to COP26 in Scotland, where they talked about this dreamed up weather-change crisis. It would have been much better if they all flew their private jets to Korea, and we made them all enter the Squid Game. Moreover, when it comes to this, so-called carbon crisis, they don't have much of a clue. How on earth can carbon-based life forms complain about too much carbon? Yep, the Squid game would get rid of a few useless tonnes!

Also, I read that poor Elon Musk has been asked by the useless UN to give them 6-billion USD to solve world hunger. What a liberty! Elon Musk and his electric cars are doing a lot for the planet, according to globalists, so why are they picking on him instead of Soros and a host of other crony capitalists?

I think it's got something to do with Soros owning most of our politicians, (but we are not supposed to mention things like that).

As I see it, poor people in the west have done an incredible job of addressing world hunger. Just look at how much of our money goes to China every day. With that amount of money at their disposal, perhaps we should ask China to solve the hunger problem. After all, they do have a successful history of doing that in their own country.

But hats off to the Chinese leadership for not attending the COP26. I heard they thought it was better to stay at home to work on growing their economy - for which they will burn millions of tonnes of carbon fuels every day. Staying at home was deemed a far more productive use of their time, rather than listening to the moral-signaling of a bunch of sandal-wearing western politicians out on a jolly!

This COP26 was so important that the leader of the free world, Mr “Let’s go Brandon”, was filmed asleep behind his mask. But at least Uncle Joe didn’t "poo his pants", as he did when he met the Pope a few days earlier. That was, without doubt, a Holy Shit moment!

I know I’ve been a bit harsh on many of you over recent weeks: The noise from ex-pencil salesmen; criticizing some NFTs of dubious value; and my questioning that some are succumbing to the powers that be and going out of their way to bring in potentially crippling rules and regulations. But it is just me sharing my observations, whilst the rest of you are out trying to make a buck.

One of the main reasons for my coming back was to learn more about the threat this industry poses to the tradition financial markets, run by old men set in their ways and career politicians. For me, over the past 25-years, we have seen too much bullying coming from those in power, as well as too much interference concerning what people should and could do with their own money.

How this industry copes with the coming year and its potential problems, will be of utmost importance. Many believe in accepting that this business will be hi-jacked by the authorities and that might be a safer option. For the big players, going down this route might save their ass! But it is the young, dynamic guys who are bringing their many creative talents to this business (and in a host of other industries) who crave freedom and whom we need to hear from more.

As I've said before, the blockchain is here to stay, but what it will look like in a year is still debatable.

I say, if it's these old men are the ones who caused the present problems, isn’t it time we did the modern thing and simply cancel them?

Until next time,
Viva le Resistance!