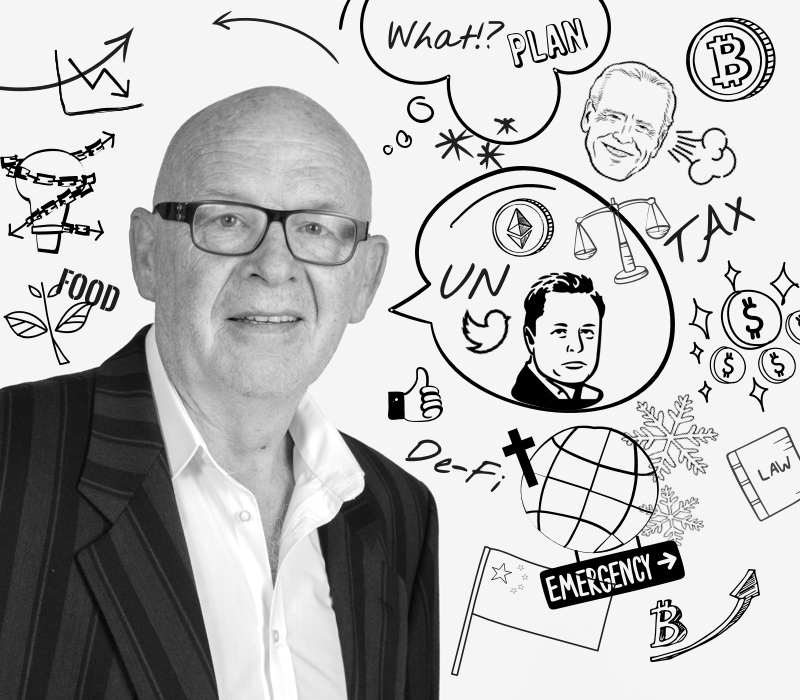 I thought about starting this week's report commenting on Joe Biden emitting his unique methane in front of the Duchess of Cornwall. But there is no point causing a stink!

And talking of something that stinks, what about this Billionaires tax which passed into law last week. Envy is so wrong, even when millions approve.

Under attack, Elon Musk, took to Twitter to ask his followers if he should sell 10% of his shares in Tesla to pay this Marxist tax? And this came after the UN had asked him to part with 10-Billion USD to solve the world's hunger problem.  Someone, please tell me why we keep funding this body.

We can only guess how long it will be before he is taken to Le Hague and charged for crimes against humanity?

Musk earns his money from his cutting-edge products and reinvests in companies he owns.

South African born Musk, doesn’t involve himself in American politics, nor does he seek government funding. He looks at a problem and tries to find a solution.

What on earth is wrong with that?

Cryptocurrencies were coined to solve a problem from which we all suffer: The dilution of our wealth and assets by over-reaching Politicians and central bankers.

They have been doing a truly excellent job, perhaps too good a job.

Now they have got governments grubby hands grabbing and poking at them, wrapping them in red tape and pretty bows, just waiting until the right time before they can start squeezing them dry.

For the casual observer, there has been a frenzy entering the crypto world. Such a frenzy has not happened since the internet bubble burst. And it is a bit worrying.

Outside of the decentralized World - where most of humanity lives - the problems are building up.

Inflation will be with us for the foreseeable future as cheap energy becomes a thing of the past.

Global-warming people are going to cost us millions of jobs and possibly thousands of lives.

We know that energy poverty kills. So, if we have a cold winter, let us see who takes responsibility for those who will freeze to death because they cannot afford to turn on their heating.

Saving the planet by killing the people on it, either financially or physically, is not morally just.

Greta Thunberg visited London to complain about global warming, yet needed to wear two coats whilst protesting because it was so cold. I hope she gives one to a person in need to help them get through the winter.

However, the madness is not just with the inconsiderate, badly informed protesters. It is everywhere.

This week, at a time of high energy costs and inflation, the UK government has decided to spend millions investigating how best to support pregnant men.

Yep, you read that right. Pregnant men! (how long before someone creates a token for that?)

As an old guy, I am not rushing to embrace this alternative world that so many others are loudly cheering, as so much does not make sense.

I am interested in De-Fi and the Blockchain because the technology is here to stay. At my stage in life, I am learning, not so much for my benefit but so I can explain how they work to friends and younger members of my family.

As some have pointed out, I don’t always use the correct terminology or miss some things that are happening, but at the current rate of growth and change, can you blame me.

Moreover, will it take another generation before the masses know how this crazy business works, and by then, will it be too late to realize the gains investors are reaping today?

The question many are asking me is a very basic one.

If so much investment money is going into cryptocurrencies and De-Fi, then where will the investment capital come from to fuel the real economy?

I'd like to say that the funding will come from profits made in our industry, but will it?

Who is going to take their capital out of an investment sector which is offering 25% annual returns, or offering the potential to earn 10x or 100x on their investment? Few people will be doing this.

Those in the business don't t care, because ultimately, it's about creating and preserving personal wealth, as it should be in any capitalist environment.

But what happens when pension funds take chunks of their money out of the stock market and store it in Bitcoin or even Meta?

These products are attractive, but the more money they attract, the less money we see going into tangible sectors like commodities.

Down the road, this may have massive repercussions.

Oil is not the only game in town. A little thing like food is going to become very important.

Food inflation is starting to hit home, and it will not stop after we buy our Christmas Turkey. Food prices will continue to rise.

What we know about Marxism is, wherever it is adopted, be it in China, Russia, North Korea, Zimbabwe, Cuba, or Venezuela, the result has always been the same.  People suffer, some die, from starvation.

So, when we stop investing in the crazy world of imaginary digital antiques of the future, putting a few bucks into the commodity space might prove financially prudent and socially responsible.

The best way to get deep into commodities is to buy commodity yielding land.

Bill Gates has bought unknown thousands of acres across the USA. Elsewhere in the World, China is buying almost whole countries. If not China, then it is Middle East sovereign funds, who have been quietly buying commodity land for almost 2-decades, especially across Africa.

In western Europe, we shied away from buying land in other countries because of our colonial history. But there is an interest in Europeans becoming more involved in African commodities.

African leaders have woken up to some of the deals signed with China, and they are not too happy. We have seen this discontent by observing how China has increased its military presence in certain parts of Africa.

Africans are possibly the people who need crypto and decentralized finance the most, and there is a great appetite for these products. Anyone offering a product involving commodity land in Africa could find they have a much better long-term product than StapleCoins.

The intent is to discuss options on diversification. not to knock these coins and tokens.

I hear many claiming, using bonds and equities, or diversifying by buying BTC and Ethereum. I even hear a few salesmen say, bet the farm on crypto.

From my point of view, the farm might be the last thing you want to gamble away.

Until next time
Good luck, and good trading