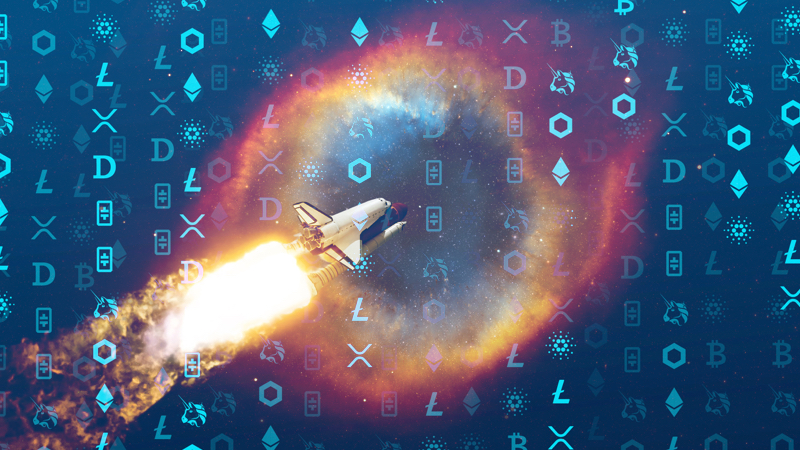 Bitcoin, Ethereum and Ripple all driven by strong bullish sentiments as the digital asset industry looks set for a bountiful near term.

The week opened with a downside correction below $41,200 against the US Dollar. BTC's price traded below $41,400 and the 100 hourly simple moving average after it failed to clear the $43,500 resistance zone. The bulls were active above the $40,500 support zone.

On the 24th of March, the US Dollar succumbed to a force, letting the crypto trade between $43,487 and $42,678 value-lines at a minute positive percentage of 0.39. BTC/USD price holds around $42,500. For the past week, buyers have been able to hold above the moving averages but could not break the resistance level of $43,333 high.

However, Bitcoin traded almost 5% higher on Friday, as markets reacted to the news that Russia was considering accepting it as a payment for oil and gas. Following a low of $42,753 during Thursday’s session, BTC/USD climbed to an intraday high of $45,045 on Friday. This is the highest price Bitcoin has hit in 24 days and it came after a breakout of the $42,500 resistance level.

Going into the weekend, Bitcoin’s price has momentarily surpassed $44,000, extending its impressive streak of roughly $7,000 gains over the last week. Bitcoin has steadily increased after weeks of difficulty, approaching the $45,000 mark –a 1% increase in the last 30 days. Bitcoin is exhibiting a trend that indicates it may sustain its recent gains. According to Bloomberg Markets’ crypto monitoring, a so-called triangle shape on Bitcoin’s price is compressing tighter and the cryptocurrency is poking at the triangle’s upper end.

On Sunday, Bitcoin started a fresh increase above the $45,000 resistance against the US Dollar. BTC even broke $47,000 and is showing positive signs. There was a bullish trend line forming with support near $45,200 on the hourly chart of the BTC/USD pair. It opened the doors for more upsides above the $46,500 level. The price even jumped above the $47,000 level and settled above the 100 hourly simple moving average. A high was formed near $47,561 and the price is now consolidating gains.

At the beginning of the week and for the first time since 2 March, Ethereum's price breached the $3k level. Ethereum’s pump on Monday and Tuesday was not completely out of the blue. The king alt had gradually been ascending on its charts since 15 March.

Going into Wednesday, Ethereum's price continued to flirt with $3k. riding on the back of the positive market sentiment, the king alt went on to breach the said level for the first time in three weeks. After noting a minor 0.8% dip, the alt king was seen exchanging hands at $2957 with a bullish crossover above the 9-day and 21-day moving averages.

After breaching the psychological price of $3,000, Ethereum (ETH) continues trading above this level based on regained momentum. The second-largest cryptocurrency based on market capitalization was up by 3.22% in 24 hours to hit $3,050 during intraday trading, according to CoinMarketCap. Ethereum experienced notable accumulation, illustrating more demand.

The world’s second-largest cryptocurrency surged to a multi-week high. Ethereum climbed to an intraday high of $3,183.96 during the Friday trading session, which is the highest point at which it has traded since February 10. The weekend gains mean that ETH has now climbed for 11 of the last 12 sessions, gaining over 15% within that period.

Going into the weekend, ETH/USD began to create a new bullish movement as the coin traded at $3215 preparing to cross above the upper boundary of the channel. The coin is likely to create more upward pressure as the bulls dominate the market.

At the opening of the week, the XRP price continued to push higher despite multiple attempts to keep it down. Despite Sunday’s price action nearly wiping out all of Saturday’s gains, buyers were very responsive to any dips in Ripple.

On the morning of Tuesday, the XRP price jumped above a key level; it surged on a wave of positive news from the FED as investors return to equity markets to place their bets. XRP price looks set to jump another 5% intraday and close near $0.791. XRP was set to pull another massive rally like it did at the beginning of February.

On March 24, the XRP price looked ready for another leg-up as it approached the $0.82 support level. The recent breakout saw Ripple provide gains for its holders until it began retracing. The technical formation forecasts a 31% ascent to 3%, determined by adding the distance between the flagpole and adding to the breakout point at $0.76. XRP rallied 10% and retested the first hurdle at $0.85 and traded at $0.83.

The week opened with Cardano's price rising after a series of consecutive bullish engulfing candles were established on the 8-hour chart. Cardano price formed a bullish cup and handle pattern following the most recent price action. The bulls managed to establish a bullish engulfing candlestick into the invalidation level. ADA price rallied an additional 10%, closing at $0.975 on the 8-hour chart.

On 23 March, Cardano's price gained enough bullish pressure to break through the psychological $1 resistance barrier. That was the first time in over a month that ADA was able to overcome such a significant hurdle, allowing it to gain a lot of attention from market participants. Cardano's price posted double-digit gains and recovered from the price drop suffered over the past few weeks. Cardano founder Charles Hoskinson admitted he was wrong about dApp rollout on the altcoin’s Blockchain network.

Cardano's price crossed the $1 psychological barrier and hit $1.15. The altcoin network has witnessed massive growth over the past few weeks.

Cardano (ADA) inched higher on March 25 putting itself on course to recoup a great portion of losses that it had incurred in the first two month of this year. ADA’s price jumped by around 7.5% in trading Friday, reaching $1.19 over a month after bottoming out at around $0.75. The Cardano token’s huge rebound move netted around 60% in gains. Nonetheless, it remained at risk of losing its upside momentum in the coming weeks.

Ethereum 2.0, which is an upcoming set of upgrades to Ethereum that is intended to make it significantly faster, less expensive, and more scalable, was on the rise in the previous week. The price of Ethereum 2.0 has risen by 15.22% in the past seven days. It is currently exchanging hands at $3,349.75 per ETH2 after an increase of 6.14% over the weekend.