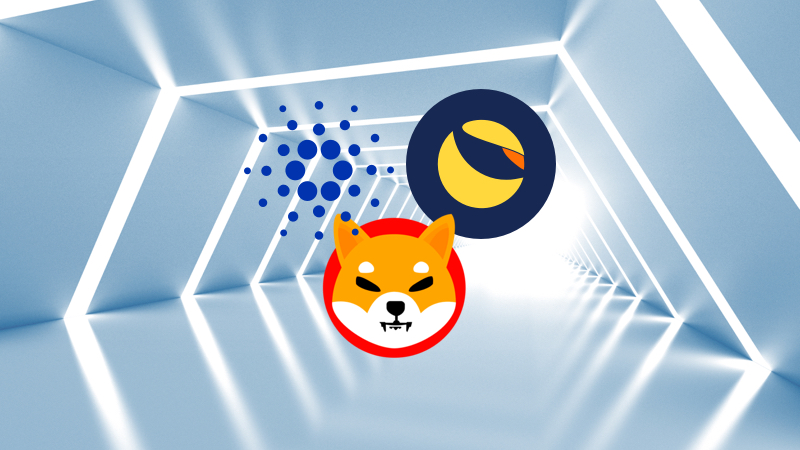 In the middle of last week, before the bloodbath continued in crypto, pseudonymous crypto analyst Altcoin Sherpa, who is a popular crypto strategist and trader with 154,100 Twitter followers, strategized what could be ahead for Cardano (ADA), Shiba Inu (SHIB), Terra (LUNA) and two other altcoins. He stated that he is short-term bullish on ADA after the smart contract platform had managed to stay above support at $1.48 at that point. “ADA: Not a bad place for a long. Support/resistance level, 0.50 Fibonacci level too. I still wouldn’t hodl (hold on for dear life) this though. It would be a swing trade.” At the time of his post, Cardano was trading at $1.56, down 2.85% in the previous 24 hours. Next, he pontificated about the popular meme coin Shiba Inu. He posted that he was expecting SHIB to ignite a quick bounce before resuming its downtrend, unless the Dogecoin competitor managed to consolidate around $0.000047. “SHIB: Short-term bottom is probably in. Expecting some sort of lower high to form. If this consolidates at the 0.50 [Fibonacci level], a more explosive move will come (But it’s going to take a much longer time in my opinion).” SHIB was then exchanging hands at $0.000048.

Another coin on the trader’s list was the decentralized finance (DeFi) payment network Terra, which Altcoin Sherpa said was poised to erupt to new record highs. “LUNA: Still a high time frame bullish [market structure], send to all-time highs.” The fourth coin on the analyst’s radar was the blockchain-based game ecosystem The Sandbox (SAND). He mapped out two potential scenarios for SAND after the coin printed a bearish lower high structure. “SAND: My plans are below. Let’s see where this goes. In general, I personally think a lower high just got printed, and we’re going to go lower. If a higher low comes, we will enter some consolidation, and then I’m guessing another push higher.” The last coin he discussed was Theta Network (THETA), a peer-to-peer distribution platform for video content. According to the guru, THETA can launch a massive rally once it takes out resistance at $9.61. “THETA: When this moves it will be explosive. It’s been ranging for quite some time, and I think that this one usually has its own market cycle. I would not buy this as an active trade though.”

As Bitcoin and the overall crypto markets had just begun to show signs of recovery during the middle of the week, new data revealed which gaming tokens Ethereum whales were most interested in accumulating. On-chain data showed that the largest Ethereum whales in existence were purchasing the gaming metaverse Decentraland (MANA) above all gaming tokens. On average, each MANA whale purchase had totaled an average of $74,320 over the last seven days, according to the whale tracker WhaleStats. Whales were also accumulating the virtual gaming token powering The Sandbox (SAND), with an average purchase amount of $27,333 per transaction. Coming in third is the gaming ecosystem token Gala (GALA), with an average of $26,339 per Ethereum whale purchase. All three coins have had extremely volatile price movements in recent days, along with the rest of the crypto markets. At time of publishing, MANA was up 16.6% during the previous 24 hour-period at $5.11. The Sandbox was up 27.23% in the last day at $7.61, and GALA is up 25.3% in the same time frame, at $0.72.

A Canadian healthcare service called Ask the Doctor is accepting meme-currencies as legal payment. Clients can pay for services with cash/cards and also pay with cryptocurrencies such as Shiba Inu, Dogecoin, and Floki. Ask The Doctor held multiple polls on Twitter asking investors for their favorite choice of payment. SHIB, Doge and Floki came out on top and is now accepted as legal payment in the healthcare company. The Toronto-based healthcare company launched in 2010, and its co-founders include former NBA players Israel Idonije and Dikembe Mutombo. It was the first healthcare company to accept Bitcoin as payment in 2016 and embraced the new financial order wholeheartedly. The medical information website will accept the three meme-cryptos with its healthcare partners in the next three days. Lately, Shiba Inu, Dogecoin, and Floki have gained massive attention, having reached a mainstream audience. Just recently, AMC Theatres announced they would accept Dogecoin and Shiba Inu as a form of legal payment. After that, real estate companies in Brazil and Argentina announced they would accept SHIB as payment for their newly constructed apartments. In addition, many coffee stores and small-scale supermarkets around the world stated that they accept SHIB as payment.

Additionally, a mattress store in Tennessee by the name of Beds to Go placed a full-page advertisement in the local newspaper announcing they accept HEX. The mattress company also accepts cryptocurrencies such as Bitcoin, Ethereum, Dogecoin, Litecoin and Venmo. Moreover, customer who pay in HEX receive an extra 10% discount, and so investors who jump on the bandwagon now will reap the profits when the market goes fully mainstream. And yet, Dogecoin and Shiba Inu turned out to be the superstars of 2021 since they created high amounts of buzz on social media. Tesla CEO Elon Musk had invested in Doge in February, and he alone had the power to bring the dog-themed token to life simply with his tweets and statements. Taking a similar strategy, Ask the Doctor recently tweeted, “Ask the Doctor has love for all ‘dog tokens’ and all crypto. We believe in financial/ health inclusion for everyone globally. This is why we as a company are striving to get lots of utility for $doge, $shib, and $floki #disrupthealthcare.”

Conversely, if buyers fail to breach the recent high, Bitcoin will drop to $54,000 and later to the $52,000 price levels. This will cause Bitcoin to fall to a deeper correction. Currently, BTC/USD has a bearish crossover. That is, the 21-day Moving Average (MA) line crosses below the 50-day MA line, indicating a sell signal. It is showing a level of 45 on the Relative Strength Index, indicating that Bitcoin is in a downtrend zone and capable of falling further on the downside. BTC price is above the 25% range of the daily stochastic. The stochastic bands are sloping horizontally as the bullish momentum subsides. Meanwhile, Bitcoin is consolidating above the $56,200 support as its price slumps to $55K. The current upward move has been stalled at the $57,400 high. If Bitcoin falls and breaks below the $56,200 support, the market will further decline to $53,800.

Cryptocurrency executives to be questioned in Congress

Executives of eight major cryptocurrency firms have been called to testify before a U.S. congressional committee being held on December 8th. Witnesses called to appear include Coinbase's Alesia Haas, Circle's Jeremy Allaire, and Bitfury's Brian Brooks. This will be the first-time companies which represent the controversial sector will be questioned in such a way before Congress. U.S. politicians across the political spectrum have called for more scrutiny of cryptocurrencies. Elizabeth Warren from the left-leaning Democratic Party has called for tougher regulation of the sector while Donald Trump has described cryptocurrencies as a scam. Mr. Brooks of Bitfury had previously served as a top banking regulator under the Trump administration. At that time, he had a role in the policymaking surrounding cryptocurrencies. Cryptocurrencies are not currencies in the traditional sense, although they can more and more frequently be used to make payments.

They are stored online in the investor’s digital wallet and act more like investment vehicles or securities, often with a high degree of volatility. However, the anonymity that comes with paying using cryptocurrencies has also meant they have been favored for criminal activities such as drug dealing and ransomware attacks. However, their supporters say this view of being used predominantly for circumventing the law is outdated and that innovation in this area offers huge potential. Countries around the world have taken radically different approaches to cryptocurrencies. China has declared cryptocurrency transactions illegal, a move India looks ready to follow. Many other central banks are eyeing the sector warily and discussing regulation. Meantime, El Salvador recently declared Bitcoin, which is the most widely established cryptocurrency, to be legal tender. Its president plans to build a Bitcoin city at the base of a volcano, with the cryptocurrency used to fund the project. Across the U.S., many private citizens hold cryptocurrencies in digital wallets, and several states and municipalities have begun toying with plans to integrate them into their operations.

The mayor of Miami and mayor-elect of New York have ambitions to make their cities centers for cryptocurrency business. The upcoming hearing before the U.S. House Financial Services Committee on the eighth, will focus on “the challenges and benefits of financial innovation,” according to the committee announcement. The other chief executives who have been asked to appear are Sam Bankman-Fried of FTX Trading, Chad Cascarilla of Paxos, and Dennelle Dixon of the Stellar Development Foundation.

Fidelity Investments, one of the world’s largest asset managers, plans to join the spate of companies offering investors access to Bitcoin through a Canadian ETF since U.S. regulators have balked at approval of the funds. The Fidelity Advantage Bitcoin ETF will invest in Bitcoin directly or through derivative instruments, and customers will be able to make purchases in the fund with Canadian or U.S. dollars, according to a Nov. 22 filing. The exchange-traded fund, which would be listed on the Toronto Stock Exchange under the ticker FBTC, could be launched as soon as Thursday. The filing comes several months after the Boston-based Fidelity’s officials met with the U.S. Securities and Exchange Commission to urge the approval of a similar ETF in the U.S. SEC Chairman Gary Gensler has signaled that any such funds would have to comply with the strictest rules for mutual funds. Fidelity first filed for a Bitcoin ETF in the U.S. in March.

While several Bitcoin futures ETFs have recently been approved in the U.S., spot Bitcoin ETFs have yet to be endorsed. By contrast, Canadian authorities have embraced Bitcoin ETFs, which have attracted billions in investments. Bloomberg Senior ETF Analyst Eric Balchunas said on Twitter: “This should be embarrassing for the SEC that one of America’s biggest, most storied names in investing, is forced to go up North to serve its clients.” After bursting into the mainstream consciousness in 2017, Bitcoin has proven to be one of the decade’s best-performing assets, despite lingering questions about its utility and price manipulation. The largest cryptocurrency by market value has returned around 6,000% over the past five years. While Fidelity will provide custodial services for the fund assets, it retained State Street Trust Co. Canada as the registrar and transfer agent.