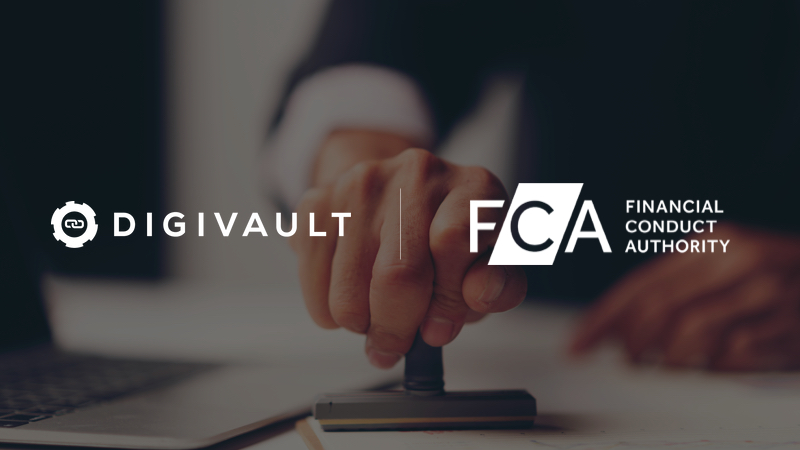 This week in the digital currency community, a lot of developments are coming to light. There are new developments in anti-money laundering regulations in the U.K. as Digivault, a custodial arm of Diginex won regulatory approval from the Financial Conduct Authority (FCA) in the U.K. to register as a custodian wallet provider. This makes Diginex the first stand-alone digital asset custodian to get the FCA's approval under the 2017 regulations on combating the financing of terrorism and money laundering. The announcement which came on Friday included Digivault's offer to provide both the warm storage and cold storage custody services for Bitcoin, Ethereum, USDC, as well as other ERC-20 tokens and ERC-1400 tokens. The storage -according to them- includes both hardware and software firewalls as security for the assets and ensures their availability when needed. It is expected that with this approval from the FCA, the demand from investors looking to have similar regulatory protection will increase. In October of 2020, Diginex merged with special-purpose acquisition company 8i, and became the first digital asset exchange operator listed to be on Nasdaq.

Being a hot topic for the third week in a row, tax authorities in Argentina have ordered that digital currency exchanges in the country add the transaction data of their customers in monthly reports. This data is meant to include the accounts and identity of all clients, their income, monthly balance, and expenses on each account. The adoption of digital currency in Argentina has been healthy, and many countries have profited remarkably from this. The reports are to be filed on the 15th of every following month. With the current economic situation in the country, many people question the likely outcome of the crackdown on digital currency and its exchanges in Argentina. Some are panicked as their alternative means of storing wealth is being threatened.

Digital Volatility On the rise?

As the second-biggest digital currency by market capitalization, Ether logs its first weekly loss as its price and Bitcoin were in the red just before the weekend. Ether price dropped by about 8.48% at $3779.81 within 24 hours, while bitcoin was about 5.88% below $48,000. Despite ending on a down note, Ether has enjoyed a six-week-long winning streak. Despite dropping for over a year, bitcoin had an increase in the balance of those with major exchanges, and some see it as a bearish sign for the market. Some conclude that this means that there is enough BTC to sell on exchanges. Regardless of the price drops in these two major cryptocurrencies, other alternative coins seem to be gaining traction. The native token of the Polygon Network, MATIC, went up in price by 22% in over 24 hours, setting a record high of $1.87 on Saturday. This marks a 100-fold rise on a year-to-date basis and a rise in its market capitalization to over $8.96 billion.

Smart contracts are not left out of this price surge as platforms like Cosmos (ATOM) and Cardano (ADA) also experienced price surges. As at the time of original publication, ATOM was up 5.39% at about $26.47, while ADA was up 18.30% at about $2.25. With the congestion on the Ethereum blockchain, the demand for alternatives has increased. Thanks to this and some other reasons, altcoins are having a field day.

Dogecoin Suffering from the Elon Effect?

Apart from the drop in the price of Bitcoin and Ethereum being the hot topic for the week, dogecoin takes center stage as suspicions that Elon Musk and Tesla greatly influence the price movements for dogecoin and bitcoin recently. With the events from February and March when the price of Doge first went surging by over 400% many have been on the lookout for events and news surrounding Musk and Doge as well as other digital currencies. Thanks to some announcements, quips from "Saturday Night Live" and tweets, Tesla CEO once again sent the digital asset market surging and the price of dogecoin "off the roof." From the issue involving misleading tweets about Tesla stock, and his payment of a $20 million fine to the U.S. Securities and Exchange Commission back in 2018, some suspect a market manipulation. Suspicions or not, Musk's recent involvement in the digital currency community has thrown light on how the tokens markets work. On May 13, Musk tweeted, "Working with DOGE devs to improve system transaction efficiency." This shot the price of dogecoin up by 14% and continued legging up till the weekend.

After weeks of dogecoin mentions by Musk, it skyrocketed. With this, most people attribute the meteoric rise in Doge to him. While hosting "Saturday Night Live" last Saturday, May 8, Musk referred to Doge as "a hustle" and sent the meme-coin down by 35%. During the week, Musk announced that Tesla would no longer accept bitcoin payment over environmental concerns. This sent the price of bitcoin falling by 10%. Most of the rallies and crashes have been attributed to the digital asset speculation trade since the beginning of digital assets adoption has been one of the major drivers of price movements.

For the past few weeks, the ban on digital currencies in India has been the subject of many discussions. Despite the ban on digital currencies in the country, banks seem to be cracking on digital asset exchanges. These exchanges are said to be struggling to continue the exchange of fiat and digital currencies. Banks are halting transfers to crypto-related accounts. Notifications are also being sent out to account owners to inform them that all digital asset-related transactions will get their accounts closed. There has been a movement against digital assets by the country's top regulator, and the Reserve Bank of India has approached banks to cut ties with digital currencies and assets. This news came in on Thursday, May 13. After a request by several banks to the National Payment Corporation of India, a retail payment system owned by the central bank to block all transactions related to digital currencies, but had their request turned down, as reported last week. Regardless of the refusal to block digital currency-related transactions, some exchanges still have issues with transfers for their clients. It is believed that the issues with transfers are related to the banks themselves, who have decided to refuse to provide access to digital assets transactions. Conversations are being held with several banks in hopes that a few forward-looking banks would offer to render their services.

DeFi Moves Up the agenda (again)

Taking the stage once again this week, decentralized finance (DeFi) continues to make waves in the digital asset space. A recent development is an addition of five more DeFi tokens by Anchorage to its custody vaults. These tokens are concentrated on decentralized exchanges (DEXs) and automatic market makers (AMMs), considered to be the beating heart of DeFi. This announced that Anchorage would be adding DeFi supported tokens like BNT, 1INCH, SushiSwap (SUSHI), REN, and Curve Finance (CRV). The investment into decentralized finance recently has grown explosively with about $85 billion locked across the Ethereum DeFi ecosystem as at the time of original publication. In a recent blog post, Anchorage pointed this out and highlighted the addition of support for Yearn, Uniswap, and others last year. Anchorage CEO Nathan McCauley stated that these additional tokens are based on client demand for them. With the growing demand for specific tokens and the fast pace at which the experimental nature of DeFi is moving, Anchorage says it has to do some tire-kicking before adding a project.

Will the Brits get their Britcoin?

With the fast adoption of CBDCs, central banks in many countries are taking the initiative to join the movement. During the week, an official from the Bank of England spoke about the institution's plan to launch a CBDC for the U.K. dubbed ‘Britcoin’ by many. The deputy governor for financial stability, Sir Jon Cunliffe, spoke on Thursday on the probability of issuing a form of digital currency to gain the confidence of its citizens on the availability of public money. According to Cunliffe, depositors who know that they can switch into state money even while under stress are less likely to lose confidence in money. He also said that with the launch of stablecoins by Big Tech platforms, a loss of confidence in money could see more consumers "locked into private money". So far, there have only been talks on exploring a CBDC and many in the digital asset community view this as intent by the Bank of England to venture towards CBDCs. After the recent plunge of Bitcoin below $50,000, Andrew Bailey, governor of the Bank of England warned against investing in digital assets.

This week's final note is the ransom of $5 million paid to Eastern European hackers by Colonial Pipeline. Sources indicate that this was not the initial intention of the company. According to sources close to the case, the ransom was paid in "untraceable digital currency" for functionality to return to the U.S. largest pipeline. It was reported that on Thursday that the sum was paid to the hackers within hours of the attack. The FBI has identified the attack to be linked to the DarkSide group. Although the "untraceable digital currency used is said to be like Monero (XMR), the hackers had demanded that the ransom be made using bitcoin. Operations were resumed on Wednesday and Colonial Pipeline can "begin reaching up to five states in the East Coast region, including Georgia and Florida." With this, the amount of those wary of digital asset investment increases and so does the likelihood of more regulations on digital assets in the future. 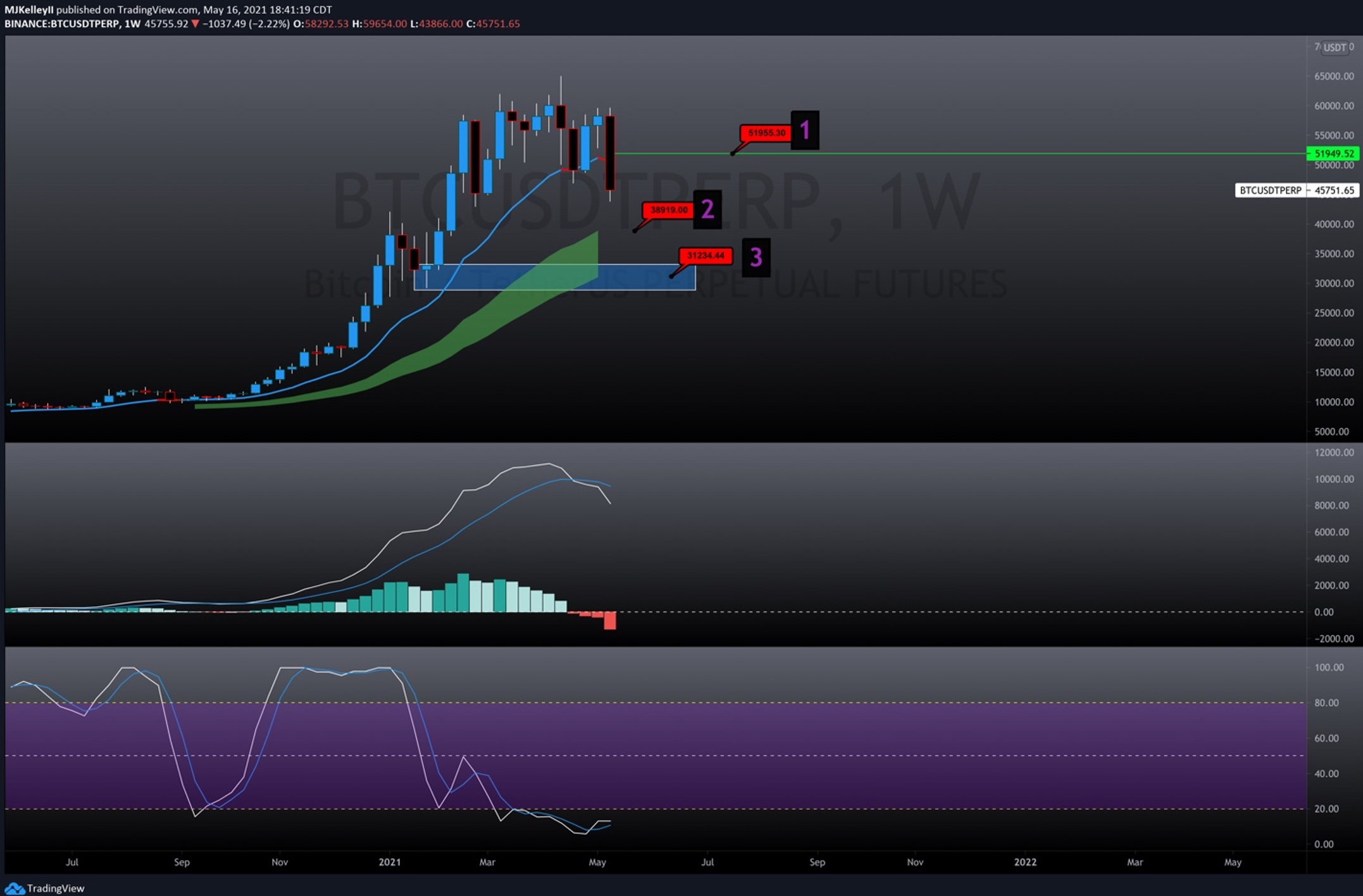 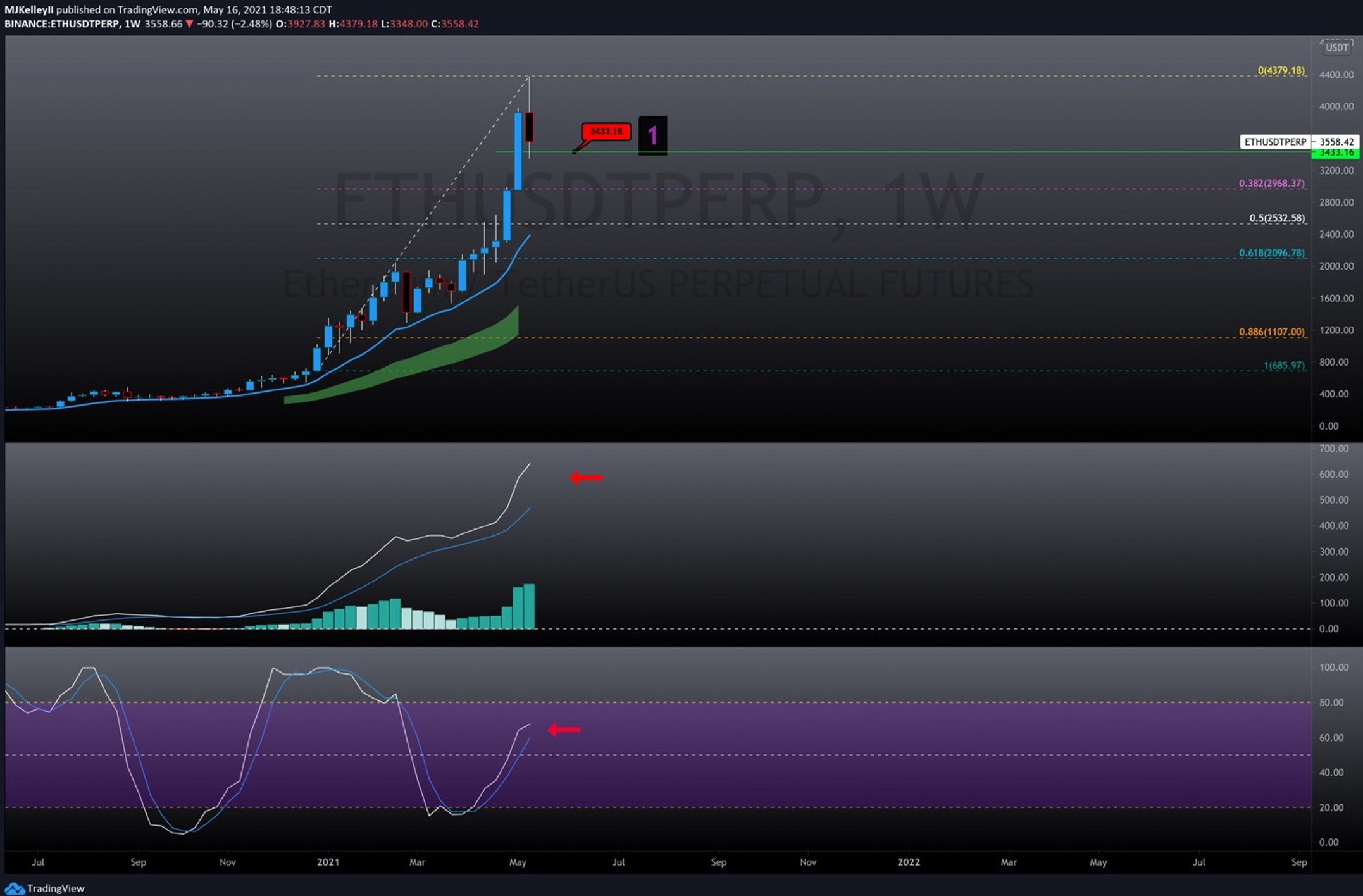 We do not have a Piercing Pattern therefore we are not short on ETH just yet. However, we may during this week of trading. ETH is very high right now and needs a correction before heading to new All Time Highs.