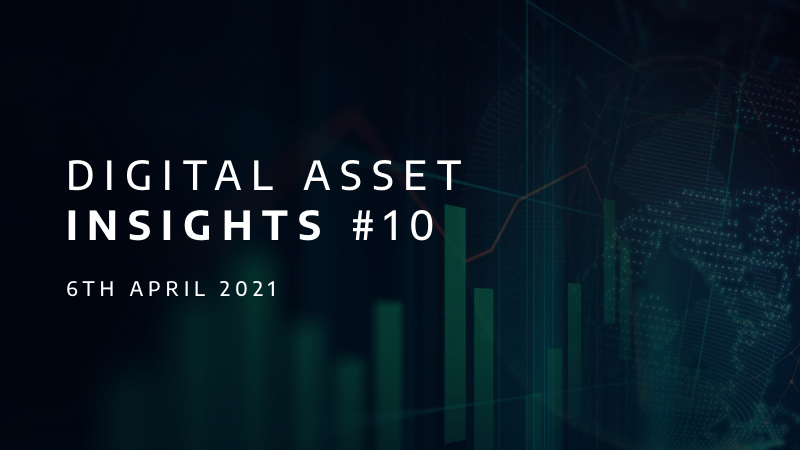 This week marks both the end of March and the beginning of April. Filled with such promise, the week saw the emergence of various noteworthy events.

The first is the Mayor of Miami's intention to turn the city into a "clean energy" bitcoin mining hub. The Mayor, who in an interview, stated that bitcoin had had a reputation as a dirty activity due to the use of "dirty energy" when mining.

Although it is his intention for hydrogen-powered and solar technology to be added in the future, he intends for the city to be a mining hub for Bitcoin as it harnesses the city's nuclear power capabilities. According to Suarez, he feels uneasy about 90% of mining being done outside the United States. Proposing in February for services in the city to be paid for in Bitcoin and even to give employees the option of being paid in Bitcoin, city commissioners had voted to have the use of digital currencies studied before proceeding with implementation. However, there are concerns as to why the Mayor chooses to address them instead of other pressing matters like climate change.

Meanwhile, outside the U.S., the Dubai Financial Services Authority (DFSA) has proposed that security tokens and derivatives be regulated. But before taking any action in this regard, they have asked for feedback and are giving a 30-day period for those with opinions to comment. In the announcement on Monday, the DFSA stated that its framework for regulating the space had already been published, and the public had 30 days to comment.

Part of the regulations update is the facilitation of distributed ledger technology-based activities, which will focus on issues related to custody provision and the trading and buying of security tokens. Some changes include allowing direct access for members like retail clients to security tokens trade facilities.

For now, there are no proposals for other tokens like exchange tokens and utility tokens, but the agency has promised to include them later this year. The chief executive of the DFSA, Bryan Stirewalt, stated that the proposal was a "key milestone," especially for issuers seeking to raise capital in or from the DIFC using distributed ledger technology (DLT), and firms who wish to provide financial services to participate in this market.

Another battle between the U.S. Securities and Exchange Commission (SEC) and a blockchain company allegedly sold unregistered securities. Court documents from Monday show that LBRY (a peer-to-peer content distribution network) is accused of the sales of unregistered securities worth millions of dollars to investors since 2016. The SEC seeks a permanent injunction against LBRY from the sales of further tokens in addition to pre-judgement interest. According to the SEC, LBRY had sold these securities in the form of LBRY Credits (LBC), and investors were made to understand that the funds were to be used to build its product and fund the business. The open-sourced protocol network asked the digital currency community to state that the industry was at risk and said their LBC are not securities.

According to the SEC, the tokens were "sold as investment contracts in exchange for U.S. dollars and other non-monetary contributions." LBRY is an open-sourced protocol that allows participants to post content without fear, freely. Part of the evidence implicating LBRY was a tweet made by Grant Gulovsen, a digital asset lawyer, alleging a vendor's enlistment to act as a market maker (or MM) and paying the sum of 40 million LBC. Operating as a middleman, the MM continually bought and sold LBC regularly at the prevailing market price. This is some way to providing false credibility of the platform's ability to generate profit. The SEC has been on a regular lookout for digital asset companies whose operations were outside the securities law of the U.S. by selling unregistered products to "vulnerable" investors. Among these is Block. One, Telegram, and Ripple.

SEC still needs to be regulated

In an interview on Thursday, the former SEC Chairman stated that although Bitcoin was a non-security at the SEC, it still had to be regulated. According to him, direct or indirect regulations will play a part in what will drive digital assets' desired direction. Although he was "speaking as a citizen" while he was in office, he was always hot on the tail of fraudulent and unregistered ICOs. In his time in office, the SEC sued Ripple Labs and refused the approval of applications for any BTC exchange-traded funds. Clayton, who was named non-executive chairman of the board of directors in the Apollo Global Management, also has an advisory role at the hedge fund One River Digital Asset Management, which he took in March.

Meanwhile, on Friday, Ethereum gained another 5% increase, making it a new all-time-high and the second-biggest digital currency to maintain its growth for five days. Trading as high as $2,074, it surpassed its previous high. In the wake of Visa's facilitation of digital currency-based settlements on the Ethereum blockchain network, the digital asset experienced an 18% increase this week. Visa on Monday had announced its program to use stablecoin USDC over ETH to settle transactions with its partner Crypto.com. The price increase of Ethereum this year is nearly triple its former price. The digital currency's growth rate so far has become astonishing enough for billionaire investor Mark Cuban to call it "the closest we have to a true currency." Chart indications show the end of the multi-week consolidation and asymmetrical triangular breakout, which suggest the resumption of a broader uptrend. Many traders are buying into a $25,000 call option that expires on the 31st of December 2021, as listed on Deribit. The popular opinion indicates that Ethereum has outperformed Bitcoin in every way to date. Whether this is true is yet to be decided.

To meet growing customer demand, Ripple acquires a significant stake in Asia-based cross-border payment specialist Tranglo. This announcement came on Tuesday when Ripple stated that achieving a 40% stake in the company expanded its RippleNet On-Demand Liquidity Service. Tranglo is a cross-border prepaid credit and money transaction hub that provides not just individuals but also businesses with the ability to transfer payments globally. Ripple had said that the payment landscape in Southeast Asia is highly fragmented, with each country having its payment infrastructure but lacking a standard integration for cross-border payments in the region. This move, according to them, is a fulfillment of their commitment to enhancing the payment ecosystem in Southeast Asia. Tranglo had stated that their partnership with Ripple was "…to provide On-Demand Liquidity to new markets;.." this statement was made by Tranglo CEO Jackey Lee in a piece of news where he also added that they aim to provide equitable and accessible financial services to the masses. Ripple had on the 19th of March hired former Goldman Sachs executive Brooks Entwistle as the managing director for Southeast Asia to scale the company's operations in the region.

In the U.K., Her Majesty's Revenue and Customs (HMRC) updated its guidance on digital assets taxation. In its update released on Tuesday, the HMRC added income from staking in proof-of-stake networks. The released guidance is almost identical to that on mining, but their separation paves the way for divergence in the future. This is the first guidance released by HMRC that describes in detail how to treat staking for taxation. This had previously been confused to come under the same category as mining and was treated under the same guidelines as that of mining. This new guidance was issued as part of the HMRC's internal manual on how digital assets would be treated during taxation. This new guidance consolidates the previous separate guidance applicable to individuals and businesses into one manual. Sources reveal that the recommendation is the HMRC's commitment towards providing their customers with clarity and will help companies and individuals understand the consequences of the different types of transactions in digital asset taxation.

The new guidance states that taxation on staking activities by any business will depend on what such actions amount to; for example, if it amounts to a taxable trade. Some other factors include the nature of the organization, the degree of the activity, the commerciality of the action, and the risks involved. Those staking activities that do not amount to trade and taxable as miscellaneous income. This is unlike business activities calculated according to the relevant tax rules when they don't amount to taxable transactions. However, regarding individuals, the HMRC has said that digital assets kept by individuals or businesses and then sold later will be subject to Corporation Tax and Capital Gains Tax on Chargeable Gains. With this new guidance, it has become clear that fewer individuals and businesses would feign ignorance when they fail to adhere to the tax laws.