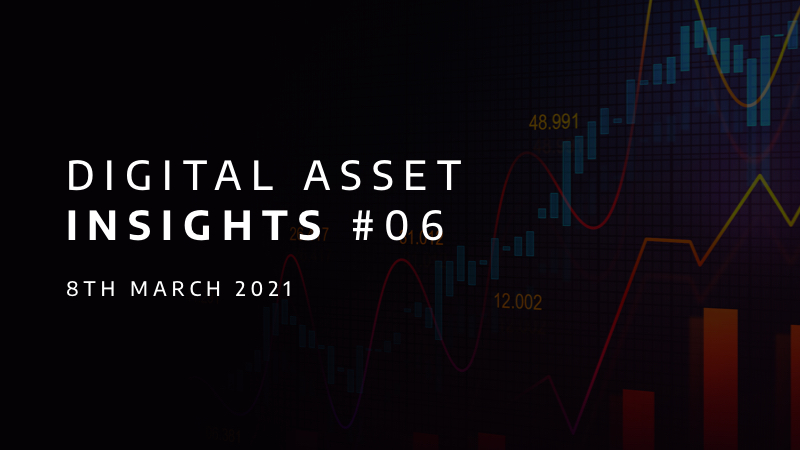 As this week begins a new month, many changes continue to occur in the digital currency world. For one thing, the community continues to grow as more institutions and individuals keep adopting digital currencies, and its daily purchase continues to rise. The new week began with Google Finance's initiative to add a dedicated digital currency field as one of its placements. This makes the digital market one of the five default markets that users can choose from when making market comparisons on the platform. Among the markets on the comparison list are the U.S., Europe, Asia, and the currency markets. Many believe this to signal the rise of digital currency as a major currency. Given the adoption of Bitcoin by many institutions this year, it has experienced a surge more recently than ever before and has (to a large extent) become a part of the corporate world. This new surge in digital currencies which is institution-driven largely trumps that of 2017, which was retail investor-driven. According to the tech giants, even though they cannot compare to those of three years ago, the trends for the search of 'Bitcoin' and other digital currencies online have increased for several months. For now, the number of digital currencies being tracked by Google Finance is limited to Bitcoin (BTC), Ethereum (ETH), Litecoin (LTC), and Bitcoin Cash (BCH). With the way things are going, many believe that digital currencies are fast becoming a part of the financial sphere, and more permanently at that.

Dogecoin, the meme-based digital asset, finds its way to the happenings at the beginning of the week, which heralds the new month as its developers announced the release of a new version of the protocol's core on Sunday evening. This becomes its first significant update since July of 2019. According to them, this new version comes with reduced default mempool expiry time and improved synchronization speed. The digital currency that many believe has displayed cuteness to over a $6 billion market value now has a significantly improved speed, allowing the upload of nodes by eliminating expensive integrity checks performed during the transfer of one block to another. This, therefore, removes the default time for cached transactions to just 24 hours from its previous 336 hours. The digital currency, which only started capturing traders' attention after Tesla CEO and billionaire Elon Musk began a series of tweets about it, was initially released as a joke in 2013. It occasionally grabbed the public's attention and experienced a surge in price before falling back to trade a little less than a penny. As we have seen throughout last month, Elon's tweets have garnered the interest of many individuals for Dogecoin and moved it up to the list of the top 10 most valuable digital currencies with a market cap of over $10 billion. It is rivaling and even overtaking more significant coins. This was one reason why its developers decided to make the underlying technology more robust to perhaps accommodate its future growth. Though it has dropped back down the list, it still sits among the top 20 with a market cap of $6.27 billion at $0.05 per coin as of the time of publication.

As the world of digital assets continues to expand, more sectors of the economy are adopting its use as a means of transaction. The E-Commerce giant Rakuten is one of the few who have begun adopting the use of digital Currency on their platform. As one of the most dominant e-commerce platforms in Asia, Rakuten allows users to spend Bitcoin and other digital currencies on its platform. The announcement which came during the week confirms that its users are now able to exchange not only Bitcoin (BTC) but Ether (ETH) and Bitcoin Cash (BCH) for its e-money Rakuten Cash. Stating that no fees will be levied on transfers ranging from 1,000 yen ($9.37) to 100,000 yen ($937), customers can now make payments at thousands of merchants across Japan as long as they accept the Rakuten point card and Rakuten Pay. In addition to this new development with the e-commerce giant, the announcement also stated plans to integrate its digital currency wallet into the Pay app. With over 95 million registered users on its e-commerce service and integration of new technologies, it's no wonder they are giants among many.

Meanwhile, in what would seem customary, another case of digital currency fraud makes its way into this week's newsletter. Centra Tech's co-founder Sohrab Sharma bags an 8-year sentence for conducting an illegal initial coin offering (ICO) which relieved investors of about $25 million. Although he was also sentenced to 3 years of supervised release, he was ordered to pay a $20,000 fine and forfeit $36,088,960. The company, which is based in Miami, offered digital-based products like debit cards to its investors in July of 2017. Previously pleading guilty to conspiracy to commit securities fraud, mail fraud, and wire fraud and using material misrepresentation to get investors to purchase securities, Sharma and his co-conspirators, also defrauded investors through the guise of an ICO. Co-conspirator Robert Farkas who in December was sentenced to a year and one day in prison for taking part in the scam, also faces 3 years of supervised release and forfeiting $347,062 and a Rolex watch purchased with the fraudulent money. The U.S. Marshal Service also sold $ 33.4 million worth of Ether (ETH) which was seized from Centra Tech.

Just as there are those willing to raise money by cheating others on their hard-earned money, there are also those willing to raise money legally. A perfect example is CoinSmart, a Canada-based digital currency exchange during the week had announced the close of a seed funding round worth CAD$4.5 million which is about US$3.5 million. Owned by Simply Digital Technologies, CoinSmart, in a statement on Monday, said they raised the investment by issuing convertible debentures which bear interest as an instrument of debt. Although investors in the round were never disclosed, they say the funding will expand the exchange platform into the European market and also support operational changes. With this, Simply Digital Technologies can prepare for a reverse takeover as planned ahead of a public listing on the TSX Venture Exchange as they had hoped.

Speaking of European expansion, Mazzanti, the Italian supercar makers, seem to be driving towards the digital asset sphere by accepting bitcoin (BTC) payments and launching their own security token offering (STO). According to Luca Mazzanti, they cannot overlook security tokens' potentials if they are to expand. These Mazzanti (MZZ) tokens require a buy-in of €50 or $60 as a minimum for a share in the sale of the Evantra Millecavalli R. Sources reveal that they aim to raise €1 million (about $1.2 million) for the development of "a special edition of the Evantra Millecavalli R "hypercar"." Sales are expected to end 56 days from the release date. The Mazzanti MZZ token is currently being issued on Blockstream AMP, the securities tokenization platform built on the Liquid sidechain of Bitcoin (BTC). These tokens, according to STOKR's co-founder Arnab Naskar will empower investors to actively participate in the firm's growth through the acquisition of future revenues.

Nvidia Off The Hook

According to some investors, Nvidia gave false statements regarding revenue growth from the sales related to digital assets mining in which about $1 billion in revenue were misrepresented. However, the district court had to rule in favor of the defense due to insufficient proof to back the claim and said that allegations did not plausibly indicate that Nvidia acted with conscious or deliberate recklessness. The dismissal of the case came after investors were allowed to include additional evidence to back their claim.

NFTs On The Rise

As the week ended on Friday, the Genesis tweet made by Twitter CEO Jack Dorsey began heating up as attention was called to its tokenized version. His first tweet was tokenized on the non-fungible token (NFT) platform Valuables. Valuables created by the social network Cent is an Ethereum-based platform where Twitter users can authenticate their tweets and tokenize them for sale. These tokenized tweets are only sold after the tweet owner accepts the bid. The 2006 tweet, which was minted in December 2020, ignited a bidding war, and as of Saturday morning, had gotten a bid of $2 million from the founder of TRON and CEO of BitTorrent Justin Sun.

According to sources, Sun competed with Sina Estavi, CEO of Bridge Oracle, a Malaysian-based and TRON-affiliated company. The first offer for Dorsey's Genesis tweet was made by @TheGaliosCxn on December 15th, 2020 and is also Dorsey's first-time showing interest in Ethereum. Many eyes are on the social platform CEO and his sudden interest in Ethereum, especially after Thursday's announcement by the platform’s affiliated company Square about acquiring the music streaming site Tidal. Already, Dorsey had announced his collaboration with rapper Jay-Z on expanding the use of Bitcoin (BTC) in Africa, and many believe the frenzy over the first-ever tweet on the Ethereum based platform fuels that fire even more.