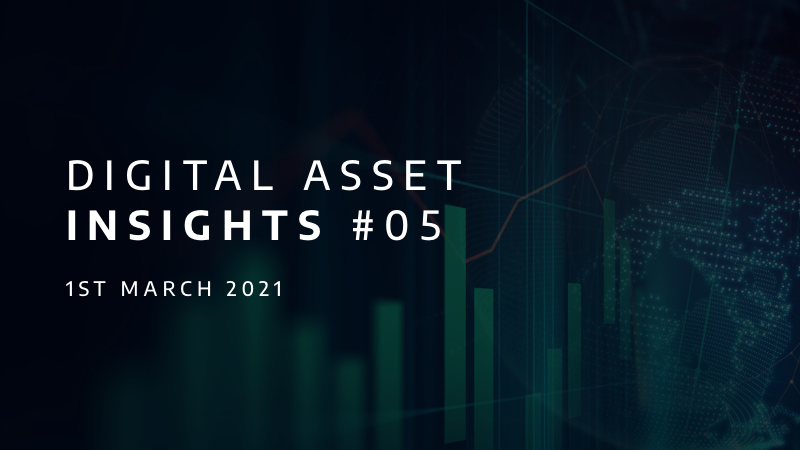 Traders, investors, and enthusiasts of the digital currency community experienced what seems to be a downer this week. The week's highlight began with the change in the price direction of Bitcoin, which was heading towards $50,000 but slipped back 5.7% over 24hours—ranging between $44,180.99 - $49,325.91 (according to CoinDesk 20), leaving traders with a bearish signal mark. Considered to be the roughest weekly performance since around March of 2020, many believe that the market's volatility is no simple matter.

The quick exit of many traders from leveraged bets earlier in the week seems to be the cause for the market correction and the drop below $45,000. These new market conditions coincided with a sell-off due to concerns over the surge of bond yields. On Friday, the Bitcoin market was quiet compared to the volume spike earlier in the week. This silence is what many believe to be anxiety over the end of the month expiration date on options contracts totaling about $3 billion. According to derivatives data site Skew, this occurs with open interests standing at $48,000. A senior editor at OKEx, Hunain Naseer, stated that the continuous pull could explain Bitcoin's recent price action on the underlying spot price by the highest strike price. They added that the market has more freedom to pick a direction now that the issue of options contracts is settled. Regardless of the week's high volatility, many remain optimistic as blockchain data show more investors accumulating Bitcoin. These come from observing the outflow of vast amounts of Bitcoin from exchanges like Coinbase Pro.

Meanwhile, in the United States, the State of Wyoming introduced a bill for implementing a company filing system that uses blockchain technology. The act will enable the state to implement a new filing system based on the technological framework of blockchain technology and is expected to already be in use by the end of 2021. This is meant to be used for data, reports, and any other required information by law. Harnessing APIs and using authenticated digital identities to provide the necessary security, the bill seeks to take advantage of the technical intricacies of the blockchain and invites interested parties for consultation. This will allow registered business and legal agents to improve not just the bill but also the implementation itself. Being one of the most blockchain-friendly states in the U.S, Wyoming hopes to attract companies and businesses in the digital assets space.

As the week came to an end on Friday, the U.S. SEC in a compliance notice, outlined a framework to help vet investments on digital assets. They further warn mainstream financial actors like investment-advisors and broker-dealers to tread lightly, especially when introducing digital assets to the traditional financial world. This came from the Division of Examinations of the SEC and was in addition to listing a few focus areas, including record-keeping, custody, and conflict of interest protocols. Although the notice seems nonspecific to any single event, the release is timely as more corporate investors struggle to handle their digital assets without raising regulatory concerns. On the other hand, is the ban by Microstrategy on employees from trading BTC ahead of market-moving corporate buys. And on the other is Elon Musk's hope that the SEC’s investigation into his Doge tweets which is always followed by an increase in its price, is real.

According to the SEC examiners, the notice is a reminder of the risks in digital assets and distributed ledger technologies. They further reiterated that market participants are responsible for guiding against the risks through compliance frameworks. While some focus on bookkeeping practice in digital assets investment, others focus on how investment firms control private cryptographic keys.

Ghana to launch a CBDC

Still on the topic of regulations, but this time in West Africa, Ghana's central bank uses blockchain technology to launch a live testing pilot on fintech innovation and regulation. A wide range of designs is bound to be covered by the sandbox in a bank statement on Thursday. These innovations are majorly in the financial services sector and are targeted towards women and improving financial inclusion. While also looking out for crowdfunding products, remittance products, electronic know-your-customer (e-KYC), and payment solutions for SMEs. According to the statement again, "…the sandbox will be available to banks, specialized deposit-taking institutions and payment service providers including dedicated e-money issuers, as well as unregulated entities, and persons who meet the sandbox requirement."

The project is meant to reaffirm the Bank of Ghana's "commitment to addressing the financial inclusion needs of the underserved and unbanked businesses and individuals." The fintech company EMTECH are providers of the underlying technology for Ghana's bank to run the innovation and regulatory sandbox and are also collaborators in launching the sandbox. This comes after a compliance platform for the safety test of Ghana's Central Bank Digital Currencies (CBDCs) was established in December through a partnership between EMTECH and Microsoft. After the promise to digitize the country, these developments come after the governor of the bank, Ernest Addison, in 2019. It hopes of issuing its CBDC soon, even though a CBDC pilot is yet to be announced.

Still, in West Africa, digital currency traders and exchanges alike are beginning to feel the impact of the central bank's ban early in the previous month. One of the most popular exchange platforms in the country, Luno, traded Bitcoin at a 46% premium. This increased the average price of Bitcoin on the platform than on any other major exchange, which sold at around $48,000 as of Friday. Luno, a subsidiary of Digital Currency Group, said the increase in premium from 38% earlier in the week was due to a drop in liquidity which the bank caused. According to Marius Reitz, Luno's general manager for Africa, "the ban caused a market shock..." he said that while there are no direct answers to liquidity issues, the exchange still had liquidity even though it is a third of what it was before.

In digital asset exchange, liquidity concerns the ease at which digital currencies can be exchanged for physical cash or other digital currencies without affecting the price of the asset. Low liquidity increases the conversion difficulty and also hikes the price. No thanks to the ban, traders are now forced to turn to other means of exchanging their digital currency. According to Reitz, even with the increase in the price of Bitcoin, not that many people are selling in the country as before, leading to low liquidity, which can cause the price to spike and dip. While the dollar to naira published by the Central Bank of Nigeria (CBN) on Friday was 379 naira to $1, the informal exchange rate was at 475 nairas to $1, which can influence the price of Bitcoin. Officially Bitcoin was listed at 33,000,000 nairas, which placed $1 at about 690 nairas. Some users pointed out that a $1 was going for about 700 on the platform. This sets the cost of bitcoin between $45,866 and $69,000 in Nigeria at the moment. Some users have even gone as far as accusing the platform. Of manipulating prices, saying that "the current rate of [b]itcoin and other digital assets on the platform does not reflect reality." Will the CBN's decision reduce the country's ranking as one of the top digital currency trading countries in the world? One can only hope.

While some countries are trying to end the use of digital currencies/assets, others are taking full advantage of the potentials that come with them. Companies in China having no business with digital currencies have started talks about mining. Some Chinese companies listed in the U.S. have recently swung towards mining Bitcoin from baked goods, tea, emergency rescue to online lotteries. This move takes advantage of the current price increase and is not just short-term opportunism. Having access to the U.S. capital market, state-owned energy providers, and Chinese miners properly position these companies for swift expansion of mining operations. This, according to industry professionals, can earn them high premiums in the stock markets. The addition of Bitcoin mining to these companies is a significant boost to their valuation multiples, said Yulong Lui, managing director at Babel Finance, a Hong Kong-based digital assets lender.

According to Lingxiao Yang, COO of the digital currency hedge fund Trade Terminal, having their companies listed on the U.S. stock exchange can also quickly expand their mining operations. However, some of the largest mining companies like Pooling and f2pool are yet to go public, making it impossible for them to issue shares to raise money for expansion. Therefore, Chinese bitcoin miners who wish to maintain cash flow or expand their operations have to sell their mined bitcoin using over-the-counter (OTC) desks or collateralize them to get fiat loans. These come with risks as China's crackdown on OTC trading increases the difficulty in making bitcoin-related financial transactions. As we conclude the month of February, we look forward to more extraordinary events that the month of March has to offer.