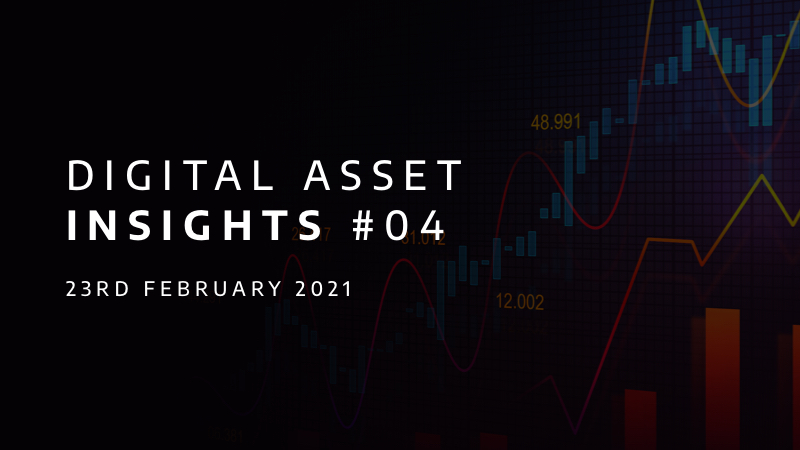 There is speculation that the rise in the price of BTC revolves around the increasing demand from those individuals seeking to hedge against inflation due to continuous spending by the government while notes keep being printed to keep economies afloat during the period of the pandemic. The spike in the price of BTC is connected to the events from earlier in the month when Tesla announced its purchase of $1.5 billion worth of digital assets for its treasury. This gave way for many investors to wonder who would be the next big player to get on the digital currency bandwagon.

While BTC was busy hitting a new high, Purpose Investment’s Bitcoin Exchange-Traded Fund in North America collected $421.8 million worth of Assets Under Management (AUM) within two days. The ETF which officially began trading on the Toronto Stock Exchange (TSX) as “BTCC” on Thursday saw huge interest, trading over $100 million on its first day of trading. In 24 hours, it went from its initial amount to $421.8 million Assets Under Management.

There are some who believe that the Bitcoin ETF could reach $1 billion by the end of the coming week. This puts the Bitcoin ETF at the top of the list of digital assets to look out for as February ends. By the time the Purpose Investment’s Bitcoin ETC had reached its hundreds of millions, another Bitcoin ETF, the Evolve ETF began trading on the same stock exchange under the ticket “EBIT” and racked up as much as $1.271 million AUM on its first trade day. Both ETFs charge a 1% management fee. The question many are asking right now is "how far can these ETFs go and just how much will they be worth by the end of the month?” well, it is truly worth the wait.

While new digital assets are breaking new records and making gains, some diligently wait for opportunities to relieve many of their concerns. This comes on the back of the hack on a cold wallet belonging to Stakenet, a U.S. creditor firm. This makes it the second attack on the same platform within three years. The last hack was in 2019 and this occurs just as the exchange in the middle of it being liquidated after the previous security breach. The previous security breach causes a loss of NZ$24 million approximately (US$15.5 million). Reports indicate that NZ$62,000 approximately US$45,000 were transferred out of its cold wallet on the first of February. Since the last hack in January of 2019, the digital assets contained in the unused wallet were worth NZ$2.7 million (approx US$1.97).

According to the New Zealand liquidator, Grant Thornton stated that it gave no authorization for funds to be moved and the incident is currently being investigated. After the loss of funds to the breach in 2019, Stakenet has had hopes of getting back all its assets. There have been calls for an explanation from Grant Thornton under whose watch the theft occurred. Many are asking how Grant Thornton managed to fail in securing the digital assets. The incident occurs a little after former the liquidator finally allowed old users of the Cryptopia Exchange to recover their digital assets. While investigations continue on the case, Stakenet still awaits the explanation from Grant Thornton as do we all.

Being on the news for weeks seems to only be the beginning for Ethereum as developers schedule the Berlin hard fork for the 14th of April at a 12,244,000 block height. This decision comes after the Ethereum All Core Developers meeting on Friday. The hard fork hopes to come with various contract optimization including gas efficiency. The hard fork is also likely to include an update to how the Ethereum Virtual Machine (EVM) is protected against Denial-of-Service (DDOS) attacks. Although originally slated for June/July of 2020, there was a need to push back and move it forward. Moving it forward was concerning centralization issues about the Geth, which is a client that hosts most of the Ethereum nodes.

Developers who work on Eth 1.x also called the base layer have shown concern regarding the maintenance of the client. The hard fork which follows after multiple testnets contains a minimum of five Ethereum Improvement Proposals (EIP) that are to be shipped on four testnets before being deployed. This is in hopes of increasing the scalability of the Ethereum blockchain network as all indications show that this is only the beginning of more with Ethereum.

The world is getting more digital every day and just as it is getting difficult for many to hold on to their digital assets, it’s even more difficult to quell the increasing cases of crimes being committed with digital currencies. And as one who agrees, the Australian Financial Market Authority (FMS) reported on Friday that there is a need for stricter regulation. In its report, it said that in 2020 alone digital assets and its traded products made up to two-thirds of its investment fraud reports. According to the FMA, crimes committed in this category usually include fake stock offers and bogus ICOs. Seeing this method of defrauding individuals hit the digital currency world doe put quite a scare on the minds of many. Given the decentralized nature of most digital assets, it’s very difficult to keep track of what’s in your possession let alone what is not. Despite all these, there remains a growing number of digital asset scams that continue to be advertised on various social media platforms. Although one cannot completely regulate the digital currency world, the concerns about the incessant rise in digital assets-related crimes do call for concern.

morocco considering its own CBDC

Despite the growing concerns there continue to be many wanting to embrace the digital currencies space. To show just how much potential these digital assets have, many central banks are launching their own Central Bank Digital Currencies (CBDCs). One of those willing to ride with the trends is Morocco’s central bank Bank-Al-Maghrib (BAM). Sources indicate the BAM has been investigating the benefits of having its own CBDCs. This new development comes four years after its ban on digital assets in the country. It stated that they are taking a cautious approach to its speculative nature of digital assets as the exploratory committee investigates the advantages and disadvantages of making that decision. The main aim of the investigation is to analyze just how the CBDCs will affect the country’s economy. As one of those who earlier expressed concerns about how the lack of regulations around digital currencies poses a potential risk for its users, this news comes as a bit of a shock to those who remember. Regardless of the ban on digital currency assets like the BTC from the country four years ago they continue to thrive with countries like Nigeria, South Africa, and Kenya being the only African countries to trade the most Bitcoin. Will, there be an adoption of a new CBDC in Morocco, or is this just a false hope for digital currency lovers in the country? Only time will tell.

This past week saw a lot of digital currency adoption by many entities and organizations. Even the prestigious British auction house Christie’s is not shy to dip its toes in digital assets. The auction house confirmed its acceptance of ether (ETH) as payment for a digital art auction coming soon. According to a report on Thursday to Bloomberg, Christie’s indicated that for the work of digital artist Mike “Beeple” Winkelman, it will be accepting ether as a form of payment. Christie’s however made it clear that its premium must be paid in U.S. dollars. The piece called “EVERYDAYS: THE FIRST 5000 DAYS” is a collage of thousands of pieces of art the artist has posted online since 2007 and will be delivered to the buyer along with an encrypted token that is unique, nonfungible, and contains the artist's signature. According to what Noah Davis, a Christie’s art specialist in New York, told Bloomberg “We’re at this precipice where crypto [digital currency] is going to be such a more established and mainstream mode of conducting business…with this, I think it’s a perfect way to dip our toes in and give this a shot” he added. There is no doubt that this evolved mode of payment is here to stay and by all indications, it is just getting started.

By the end of what one may term an eventful week in the digital currency space, traders enthusiasts and observers alike had more than enough to look forward tan I don’t know about anyone else, but as for me, I can only look forward to the new week with nothing but excitement.